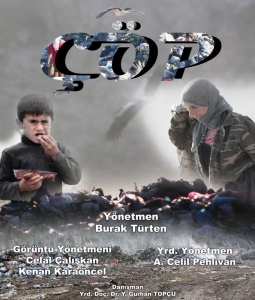 Synopsis: This documentary is about those people who spend their lives in municipality’s garbage dumps by setting up a tent around them. They even send their kids to school from there. Although they spend their lives picking recycling materials from garbage dumps, what they get in return is a mere 10 TL per day. To make matters even worse, they give half of this amount to the owner of the garbage dump. Not a single institution utters a word with regard to this inhuman situation. This documentary, filmed clandestinely, shows a slice of the tragedy and suffering that those people go through every day.

Director: Burak Türten was born in Ankara. He began his studies at the Department of Radio, Television and Cinema in Erciyes University. He has been the cinematographer and director of numerous short films, documentaries, and fictional films. In addition to his career in cinema, he was the newsreader in the university television for two years and also worked in a national channel as a newsreader and news editor for almost a year. He received many awards for his films. After giving lectures at Erciyes University in 2013, he started to work as an academic at Gümüşhane University. Türten continues his postgraduate studie at the Department of Cinema and Television and gives lectures in Gümüşhane University.

NEVER SHALL I COMPLAIN Scroll to top