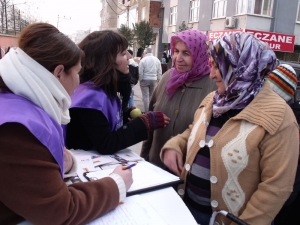 Synopsis:
Ain’t No Cinderallas!, the follow-up film of Housekeeper, chronicles the unionization struggle of women who work in an unregulated sector devoid of any social security rights and who undergo work-related accidents and lose their lives while cleaning the windows. Laboring without any rights also makes these women invisible in the eye of the public. The film observes these women fighting for their rights trying to make their labor visible and get the government to respond to their pleas for decent working conditions and coverage by the Union and Collective Bargaining Law.