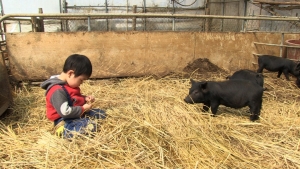 Synopsis: This film takes place when there was a nationwide slaughter of livestock to put a stop to the foot-and-mouth disease. Filmmaker Yun realizes that she has never seen a pig before and starts a journey searching for pigs. Yun goes deep into the mountains to meet a pig farmer who raises his pigs in a traditional manner. As Yun observes the daily routines of a mother pig Shipsoon and her piglet Donsoo, she discovers new facts she has never known before. As she develops a bond with the lovely pigs and acknowledges another side of the farm and meat industry, it becomes difficult for her to enjoy pork cutlets as she used to. And to make matters worse, her husband and young son Doyoung are not making her choice of daily menus easier. As she falls into a dilemma, her awareness about eating animals begins to penetrate everyday level.

Direcor: Starting with her documentary “Farewell” (2001), she has continued to make documentaries venturing beyond a human centered perspective to explore the ironies of modern civilization from non-human animals’ standpoint. As a three-part series along with Farewell, she has directed “Silent Forest” (2004) and “One Day on the Road” (2006).
2014 Green Film Festival in Seoul –Grand Prize (Korean Film Competition)

ANOTHER WAY (WITH VEGETABLES)