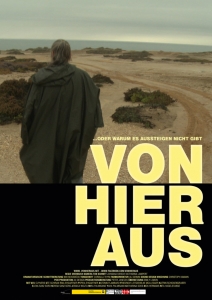 Synopsis: Johanna Kirsch and Katharina Lampert spent about a year looking for people with alternative concepts of living, many of whom they met before deciding on the three main characters. The Wieserhoisl group, Ute and Wim – all of them pursued their own convictions and longings and chose a different life in their own way. Their utopias became the concrete places the directors visited and where they were integrated into the daily lives of the characters, seeking answers to the questions: “What does living according to your aspirations actually look like?” And: “How can a film be made under these conditions?” The result was a very calm film in which static landscape shots decelerate what is shown and establish space for one’s own thoughts alongside narrative passages.

Biographies: Johanna Kirsch was born in Salzburg in 1980. She studied experimental photography at the Academy of Fine Arts in Vienna from 1997 to 2002, followed by postgraduate work in the field of art as public action at KHB Weissensee Berlin, Germany and at the Jan van Eyck Academy for Research and Production in Maastricht, NL.
Kirsch’s work is about the search for freedom. To what extent existing commitments, norms, rules, limits, and categories are really directly relevant or real, where do they correspond to individual or social necessities, and how do these worlds of necessities define themselves and their phantoms. Kirsch exhibits her work in a wide variety of contexts nationally and internationally and works in the space between performance, visual art, video, and film.

Katharina Lampert was born in Vienna in 1976. From 1995 to 1999 she studied comparative literature and Chinese studies at the University of Vienna. In 1999 she began studying conceptual art under Renée Green at the Academy of Fine Arts in Vienna. Lampert has completed many solo and group projects in the fields of visual art and film. So far she has made three feature documentary films. She primarily works with a biographical approach to identity, community, oral history, and marginalized lifestyles. She lives and works in Vienna.

THE ANTHROPOLOGIST Scroll to top