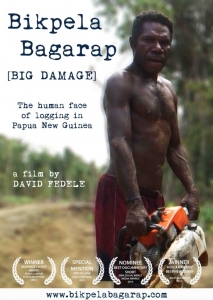 Synopsis: “Bikpela Bagarap” (Big Damage) reveals the human face of logging in Papua New Guinea. It is a tale of exploitation and broken promises in Papua New Guinea where local people are treated as second-class citizens in their own country by Malaysian logging companies and corrupt politicians.
Customary landowners are forced into signing documents they don’t understand, for the promise of “development” – fresh water, health and education, but these essential services are rarely provided. Instead, their traditional hunting grounds are destroyed, waterways are polluted, and their way of life is ruined forever.

Director: David Fedele is an award-winning documentary filmmaker from Australia. He entered the world of documentary filmmaking through a love of travel and exploring different cultures, having traveled extensively throughout Australasia, Europe, the Middle East, South America and Africa.
Generally working alone, self-producing and self-funding his projects, David is particularly interested in exploring cultural, humanitarian and social justice issues. His films have covered such diverse topics as Sub-Saharan African migration in Morocco, electronic waste in Ghana, and illegal logging in Papua New Guinea.
David’s films have been broadcasted widely, and screened at international film festivals around the world, winning numerous awards. His previous film “”E-Wasteland”” was awarded “Best Australian Short Documentary” at the Antenna International Documentary Film Festival 2013 in Sydney, Australia. David’s latest film “The Land Between” is currently screening around the world and has won many awards. David was recently selected to participate in Berlinale Talents as part of Berlin International Film Festival in February 2014.”

EPISODE OF THE SEA Scroll to top