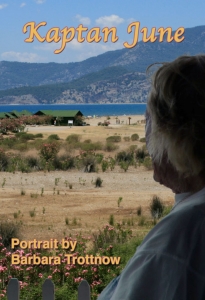 Synopsis: June Haimoff lives since the mid-eighties in Dalyan (Turkey) and is involved there in the protection of endangered sea turtles. When on their nesting beach a hotel should be built, she launched a global campaign, successfully, the hotel was not built and the Iztuzu beach is now part of a Special Protected Area. On site they all call her ‘Kaptan June’. Before the English woman stayed in Dalyan, she sailed with her boat through the Mediterranean. She is now 90 years, but full of energy she continues to fight for the protection of the environment.

Biography: Barbara Trottnow was born in Germany. She studied Social Sciences at the university of Göttingen. Later she trained as TV-editor at the German television station ARD in Frankfurt and worked for the German television station ZDF in Mainz. Now she has her own film production company and is working as author, director and producer. She is producing documentaries, mainly with a view on Turkey, where she is living part of the year.

THE FLYING FISH Scroll to top