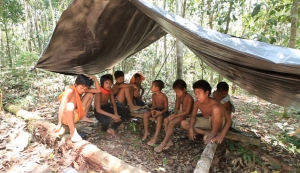 Synopsis: The nomadic Orang Rimba people (people of the forest), who live in the tribal hinterland of Sumatera in Indonesia, experienced a death streak. Only in three months, dozens of people died. Death toll was thought to be caused by a food and water crisis. If this crisis continues to attack them, the Orang Rimba people will disappear off the face of the earth.

Director: Rian Suryalibrata works as a documentary filmmaker since 2005. He has produced and directed a lot of documentary films about people, animal, environment, culture, and so on.

EPISODE OF THE SEA

BETWEEN HEAVEN AND EARTH Scroll to top