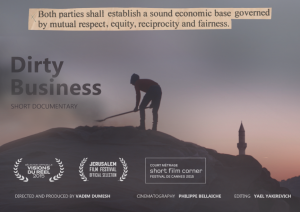 Synopsis: ‘Dirty Business’ follows the traditional coal industry scattered around Israel and the West Bank, and sheds light on economic relations between the two sides.

Biography: Originally from Latvia, Vadim got his B.Sc. from the Stockholm School of Economics in Riga. In 2006 he then moved to Tel Aviv for studies in the Recanati Graduate School of Management in Tel Aviv Universtity. In 2008 Vadim got accepted to the Production Track of the Sam Spiegel Film and Television School in Jerusalem.
Since graduating from Sam Spiegel, Vadim seeks to build a versatile skill-set in development, production, and directing of various documentary content.
Short documentary “Dirty Business” that premièred at Visions Du Reel and Jerusalem Film Festivals is Vadim’s directorial debut.

BEYOND ELSEWHERE Scroll to top