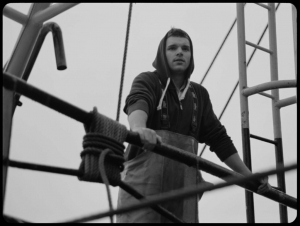 EPISODE OF THE SEA

Synopsis : In the previous century, the Dutch closed off and drained their inland sea to reclaim new arable land. The island of Urk, situated in the middle of the sea, suddenly found itself embraced by land. Its inhabitants were expected to switch from fishing to farming, but the fishermen managed to continue their trade. They found new fishing grounds far out in the North Sea.
Despite being part of the mainland for decades, the fishing village is still notoriously insular. Through a residency and numerous visits Van Brummelen and De Haan gradually gained the Urkers’ trust. They documented the material world of fishing and filmed a dozen of staged scenes performed by members of the fishing community themselves in their local dialect.
The film documents contemporary North Sea fishery and the fishermen’s struggle with a changed public perception, fluctuating regulations, and excessive global competition, while parallels are drawn between fishing and filming.

Director: Lonnie van Brummelen and Siebren de Haan have been working together since 2002, producing 16mm and 35mm films, film installations, writing, sculpture and collages that explore cultural and geopolitical landscapes such as Europe’s borders (“Grossraum,” 2005), sites of resource production and global trade (“Monument of Sugar – how to use artistic means to elude trade barriers,” 2007; “Episode of the Sea,” 2014), and the (non) sites of cultural heritage (“Monument to Another Man’s Fatherland,” 2008, “View from the Acropolis,” 2012 and “Subi Dura a Rudibus,” 2010).
Their works have been presented at Toronto International Film Festival, 2012 and Berlin Film Festival, 2013 and are included in the public collections of Kunsthaus Zürich; Les Abattoirs, Toulouse; MUDAM Luxembourg; Museum of Modern Art, New York; and Stedelijk Museum Amsterdam.
Van Brummelen and De Haan live and work in Amsterdam, the Netherlands and Moengo, Suriname.