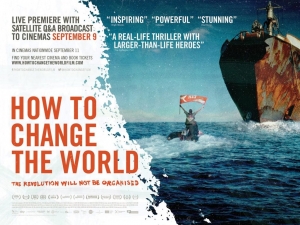 HOW TO CHANGE THE WORLD

Synopsis: “How to Change the World” chronicles the adventures of an eclectic group of young pioneers – Canadian hippie journalists, photographers, musicians, scientists, and American draft dodgers – who set out to stop Richard Nixon’s atomic bomb tests in Amchitka, Alaska, and end up with creating the worldwide green movement.

Director: Jerry Rothwell is a documentary filmmaker whose work includes the award-winning feature documentaries, “Donor Unknown” is about a sperm donor and his many offsprings which premiered at Tribeca FF and was nominated for a Grierson Award, and “Town of Runners” also premiered at Tribeca Film Festival. “Heavy Load” is about a group of people with learning disabilities who form a punk band, and “Deep Water” (co-directed with Louise Osmond), which is about Donald Crowhurst’s ill-fated voyage in the 1968 round the world yacht race, is the winner of Best Cinema Documentary at The Rome Film Festival and winner of a Grierson Award for best Cinema Documentary. In 2012 Jerry won the prestigious Royal Television Award for his directing work “Donor Unknown” and “Town of Runners”. His next film will be “Sour Grapes” for Netflix and Arte co-directed with Reuben Atlas. At Met Film Production, he has worked as an executive producer and an editor on numerous feature docs including Dylan Williams’ “Men Who Swim” and Sarah Gavron’s “The Village At The End Of The World”.

WE HIT THE ROAD Scroll to top