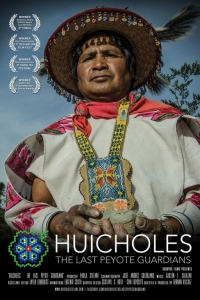 Synopsis: An urgent story about the Wixarika People, one of the last living Pre-Hispanic cultures in Latin America, and their struggle to preserve Wirikuta, their most sacred territory and the land where the peyote grows, the traditional medicine that keeps the knowledge of this iconic culture of Mexico alive.

Director: Hernan Vilchez was born in Argentina in 1971. He studied filmmaking in Argentina and Cuba. In the past decade he has produced and directed commercials, television, music videos and documentaries in Latin America and Europe. Specialized in filming indigenous and ancestral ceremonies around the world, he has worked with the Australian Aborigines of Arnhem Land, the Batwa pygmies of Uganda, the Taquileños of Lake Titicaca, the Waorani and Shipibo of the Amazon jungle, the Wixaritari of Mexico, the Mentawai of Siberut Island, the Diola of Senegal, the massive Kumbh Mela celebration in India and the Party of Iemanjá in Bahía, Brazil.

After producing the international content for hit European series such as “The World ́s Strictest Parents and Job Swap,” he currently directs his own independent documentary projects and a new international series project, “The Roots of Faith.”

In May 2014 he released his first documentary feature “Huicholes: The Last Peyote Guardians,” which has already earned awards for best documentary in film festivals in the US, Argentina, Mexico, and Indonesia.