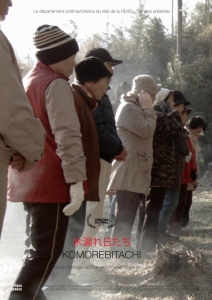 Synopsis: Every time they cut a tree, the woodcutters know that they deprive a God of a home. The laid trunk is then covered with sheets until a young tree is planted and the God has a new place to go. The celebrations of this event by the ageing population of this forgotten place shows the vitality of the forest. This way, when the last ihnabitants will be dead, the God of the forest will keep being a proof of the existence of those who used to venerate them.

Director: Masanori Omori was born in Tokyo in 1986. He grew up in Nouvelle-Calédonie and in Japan. As he was studying Political Science, he started working as a director, making of and technician for film shootings. After graduation, he goes to Paris in order to study film direction in ESEC (École Supérieure des Études Cinématographiques de Paris). Since 2013, he works as a director, DOP and production assistant in Paris.