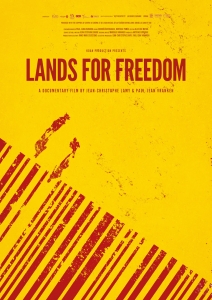 Synopsis: “Lands for Freedom” paints a vivid portrait of a rebellion following 4 farmers who have decisively turned their backs on conventional farming methods. Thanks to archive material we will also go back to a time in black and white when it was commonly believed that Science could save the world from hunger and malnutrition. Pictures of European and African landscapes during the four seasons, 4 moving and provocative characters with their life stories becoming linked to each other while speaking the same language : the one of the Earth.

Biography: Paul Jean Vranken was born in Belgium in 1960. He graduated from University of Liège, the Department of Civil Engineering. He completed film editing studies at INSAS in Brussels. He works as a freelance producer, director, cameraman, and editor. He is also a Professor At INSAS.

Jean-Christophe Lamy was born in France in 1949. He received his degree in History and Archaeology at the University of Humanities, Strasbourg. He studied film directing and production at INSAS in Brussels. Lamy works as a freelance journalist-director of documentaries and TV reports for the European Commission.

STILL AND ALL Scroll to top