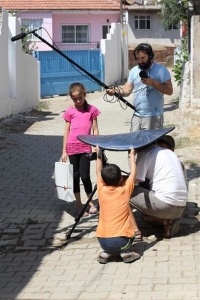 Synopsis:
Meryem Düzgün Kaya is a handicapped painter who lives in Kavacık, a village of Smyrna, Turkey. Kaya gives free painting courses to the children of village and hols exhibitions with them. She is able to do all of these in her one-roomed flat.

Director Biography:
Ahmet Giliz was born in Smyrna. He is interested in photography and film-making.