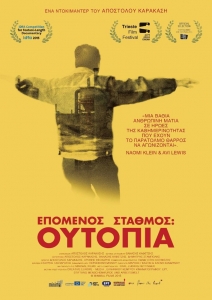 Synopsis: When the Greek factory of Viome closes down, a group of workers decides to take radical action. They occupy the factory and attempt to operate it themselves, based on the principles of direct democracy. Their venture inspires activists all around the world, while the ex-owner is astonished to see the family business turn into a symbol for the up-and-coming radical left. For the workers, striving to make ends meet, self-management turns out to be an unprecedented adventure, full of conflicts. They soon realise that in order to succeed, the first thing they have to change is themselves.

Biography: Born in 1970 in Thessaloniki, Greece. Studied film and video in the UK at West Surrey College of Art & Design (1990-1993). Since then has been involved in documentary filmmaking as director, cameraman and editor.
His extensive work for television mainly focuses on cultural and historical issues. As a director he has collaborated with many of Greece’s public television (ERT) documentary series. Parallel to that, his “more cinematic” work focusing on a creative portrayal of “common people’s” stories in an observational mode has received awards and distribution in international festivals.
As an editor he has collaborated with many of the most prominent Greek documentary filmmakers in awarded projects.
The last two years he has been involved in audiovisual presentations projects of large scale incorporating a documentary approach (Greek pavilion at Shanghai expo 2010).
He is a Lecturer at the School of Film Studies of Aristotle University of Thessaloniki, teaching editing and documentary since 2006.IDFA