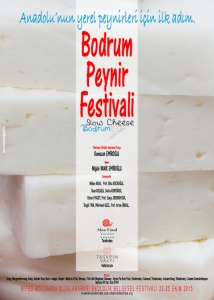 Synopsis: In the first cheese festival of Turkey, local cheese mongers, creameries and cooperatives presented themselves in Milas and Bodrum for 4 days. A producer who owns a creamery in Austria and a food hygiene specialist from Macedonia gave one-to-one cheese-making and health lessons to women farmers and gastronomy students in colleges and vocational high schools. The panel and poster exhibition drew the attention of the public and youth to our increasingly vanishing local culture. Would you like to be a part of this festival, which was completely based on voluntary efforts?

Director: He was born in Istanbul in 1972. He made his career within the field of communication / media as an editor and art director.
He prepared corporate publicity at NTV and Star between 2008-2013. He edited clips, ads and trailers at IMAJ advertising and production firm between 2003-2008. He gave lectures in the editing workshop of Galatasaray University in 2001. He worked as an executive producer for a lot of documentaries and commercials in production companies and also as a freelancer between the years 1990-2003. He started photography in 2008. He likes photographing the nature and portraits of people. His photography style is minimalist. A member of IFOD (Izmir Photography Art Association). He has been living in Izmir since 2013. He makes independent films and trailers.

10 BILLION – WHAT’S ON YOUR PLATE? Scroll to top