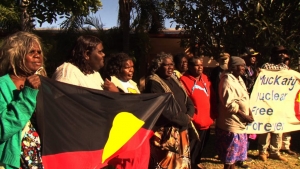 The Costs of Energy

Synopsis: In 1972, when the Australian government refused to give land to the Aborigines, they offered to lease land to them instead. 4 young Aborigines created the “Aboriginal Tent Embassy”. Supported by the Black Power movement, the Aborigines started to claim rights and sovereignty. 40 years later, in 2006, Australia still had no treaty with its first nation and decided to built a national radioactive waste dump at Muckaty, a sacred land. Aboriginal women sharing the Milwayi Dreaming, start for the first time to fight against the waste dump . The trial they have lauched against the Commonwealth is taking place in June 2014 in the bush.

Director: In 2005, I learnt about Aboriginal people’s mythology and became passionate by their history; I found a lot of connections with them. My first documentary “The Last Trackers of the Outback” written for France 5 has been awarded by the public at FIFO 2008. Since that, I have gone on to writing and shooting many films for french television. “Sovereignty Dreaming, la révolte des rêves ” is my first film as a director. I have followed between 2011 and 2014 Aboriginal women fighting against a nuclear waste dump on a sacred land.
FIFE in Paris ( Best mid length documentary )
FIFF in Créteil ( France TV au Féminin prize )

THE CITADEL Scroll to top