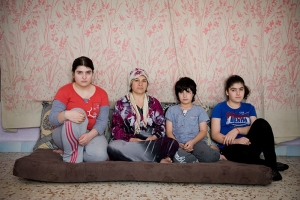 Synopsis: “Syria’s Leftover” is the story of one individual Syrian family who lived days after days in fear and misery and now try to start a new life in Turkey after they escaped the war at night. It is the struggle for survival of a mother and her daughters.Turkiye, Ruba, Fatma, Eye and Suhely had to flee Syria after the death of their husband and father. He was
a policeman; they feared they would be kidnapped and killed as well. Since then, they have been living in Mardin, a city in southeastern Turkey, about 30 km to the north of the border to Syria. They were invited by the Nazim to appear in court because they were accused of having taken part in demonstrations against the Al-Assad regime. They heard that people who were summoned to court were killed and buried behind the courthouse. Instead of going, they fled that night. The best way to reflect the cause of war is to let those people tell their story who have escaped war. The United Nations estimate that more than 220,000 people have been killed. Many million people have fled from
Syria since the beginning to war. Thousands of people have fled to Turkey, which borders Syria, in search of security, especially women and children.

Director: I am a Turkish photographer born in 1987 in Hannover, Germany. Photography allows me to sniff into other worlds and to become a part of them. I am interested in people and how they live. I like to discover things around me. My photographic works reflect my main interests in the area of human rights and
the life of minorities from all over the world. Especially women rights are in the focus of my photography. In the Muslim world and the Middle East, women rights are still limited and one of the biggest social issues in the society. I believe projects have the abilitiy to raise awareness. I am a freelance photojournalist from Germany, currently living in Hannover. I studied photojournalism at the Danish School of Media and Journalism in Aarhus, Denmark and at the University of Applied Sciences and Arts in Hannover.

LIVING ON Scroll to top