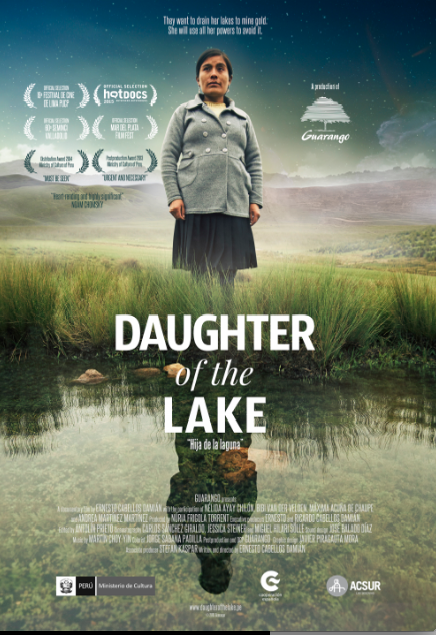 DAUGHTER OF THE LAKE

Synopsis: At the height of the Peruvian gold rush, Nelida, an Andean woman able to communicate with water spirits, uses her powers to prevent a mining corporation from destroying the body of water she considers her mother. A gold deposit valued at billions of dollars lies just beneath Nelida’s lakes and leads farmers and Latin America’s biggest gold producer into conflict.

Biography: Ernesto Cabellos Damián was born in Lima, Peru in 1968. In 1994, he founded Guarango, a documentary filmmakers association.Ernesto has produced and directed the feature documentary feature films “Choropampa” (2002), and “Tambogrande” (2007), in collaboration with Canadian director Stephanie Boyd. He also produced “The Devil Operation” (2010) with Boyd. These award-winning films chronicle over 10 years of conflict between communities and mining companies in Peru. In 2009 Ernesto made “Cooking up Dreams”, a portrait of Peruvian society shown through its gastronomy.Ernesto’s documentaries have been selected in more than 150 international film festivals, obtaining 35 awards and distinctions, and broadcast on international television channels.Hot Docs, DOC LA Mansiyon Ödülü

ARLETTE. COURAGE IS A MUSCLE.

NO WORD FOR WORRY Scroll to top