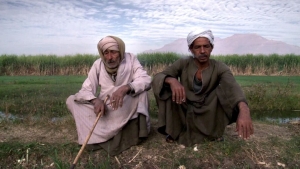 I AM THE PEOPLE

Synopsis: As the Egyptian people rise up in Tahrir Square, rural villagers in the south watch the revolution on TV. From the overthrow of Mubarak to the fall of Morsi, the film follows the upheavals through the eyes of Farraj, a peasant in the Nile valley near Luxor. In the daily life of the farmer, between hopes and disappointments, change is a long time coming.

Director: Born in 1980 in Beyrouth, Anna Roussillon grew up in Cairo, then moved to Paris. She studied philosophy, linguistics, language, literature and Arab civilization and documentary filmmaking in Lussas (France). Having studied Arabic, she teaches in Lyon, translates literary texts, participates in radio programs while working on various film projects in relation with Egypt. “I am the People” is her first feature documentary.