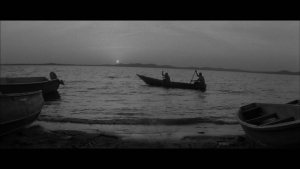 The first screening in Turkey

Synopsis:
In flickering black and white, ‘Nile Perch’ tracks a fish from a fisherman’s line on Lake Victoria in Uganda to export commodity. This hand-made film is a modern-day parable of the effects of globalization on Africa as well as meditation on the economic and ecological impact of an invasive species.