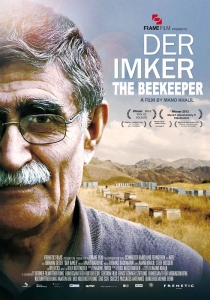 Synopsis:
The Beekeeper tells the touching story of a beekeeper. The turmoil of the Turkish-Kurdish war took away everything that he had: his wife, his children, his country and over 500 bee colonies, his way of making a living. He was left only with his love for bees and his unshakeable faith in the individual human being, regardless of his background. After a long odyssey full of deprivation, the beekeeper again found a life for himself in Switzerland, thanks to his passion for beekeeping.

Director:
Born in 1964 in Kamishly, Kurdistan-Syria. He is a Swiss citizenship. He studied History and Law at Damascus University between 1981-86. He studied directing at the Film Academy in Bratislava between 1987-94. He worked as a freelancer for Czechoslovakian and Slovakian television until 1995. He has been living in Switzerland since 1996. He currently works as director and producer. He was the founder of the production company Frame Film in 2012.