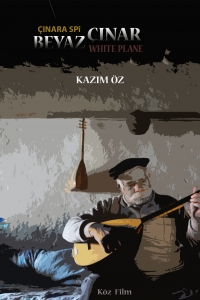 Synopsis: Zeynel Dede who lives in a mountain village of Hozat, Dersim is almost a hundred years old and a man of many talents. He has left his legacy in the areas of music, instruments, writing lyrics, masonry, wood shaping, husbandry and beekeeping. He has composed many popular songs. His specially made dowry chests for young girls are still talked about and preserved. He can also play the music instruments that he makes in his workshop such as baglama and violin. Some of the stone houses that he once built in Dersim still stand still. “The White Sycamore” gets caught in the melodies and stones, witnesses the relationships, pains, and joys within the family while discovering “new masters” that remained from Zeynel Dede.

Biography: Kazım Öz worked in Jiyana Nû Theater in the fields of acting and stage direction for 4 years starting from 1992. His first short film “AX” (The Land) made an impression on national and international audiences. Since then, Kazım Öz has directed many creative documentaries, feature-length and short films. He graduated from Yıldız Technical University, Department of Civil Engineering. He continues his graduate studies at Marmara University’s Institute of Fine Arts.

THE TREE OF ETERNITY: THE YIRCA RESISTANCE

A DREAM SCHOOL IN THE STEPPES Scroll to top