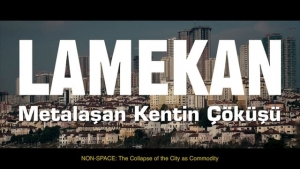 NON SPACE:THE COLLAPSE OF THE CITY AS COMMODITY

Synopsis: “Non-space: the Collapse of the City as Commodity” is about the neoliberal policies and construction-driven economic growth strategy that AKP (Justice and Development Party) has adopted during its 12 years of governance, the huge collapse of which is inevitable. The documentary shows, on the one hand, how neighborhoods where millions of people live are turned into an investment tool in the hands of both domestic and foreign capital, and on the other hand the process in which our cities, forests, waters, and our living space in general has been plundered and how the laborers have been forced to work in vulnerable and insecure conditions bereft of their right to organization.

Director: İmre Azem was born in Istanbul in 1975. He studied Political Science and French Literature at Tulane University in New Orleans. He also attended Sorbonne University in Paris for a year to receive his French Literature degree.
After having graduated, he moved to New York in 1998 and started to work in a publishing house. After 2004, he gave up his publishing job and worked as a cinematographer and editor in independent projects. He was also engaged in furniture design and production.
In 2007, he moved to Istanbul and started to work on his documentary about the neoliberal transformation of the city, “Ecumenopolis: The City Without Limits.” The film, which was completed in 2011, received a lot of awards. İmre Azem has continued to work on his short and feature-length documentaries. He has also been making video-news in diken.com.tr since 2014.
His latest work, a short documentary named “Non-space: The Collapse of the City as a Commodity” was released in March 2015. He still makes documentaries, video-news and is engaged in carpentry.